These quotes appeared on the welcome page of The Write Place during 2002. Click your "back" button to return to your previous page. Enjoy!

"The only thing I ever saw growing up was
poor people in overalls and brogan shoes and ragged clothes.
But in my books I would read about kings and queens
with their velvet clothes and big diamond rings.
That's how I knew there was a world outside the Smoky Mountains.
And because I felt comfortable in those stories, I knew
it would be okay for me to go out in that world.
My books kept me from being afraid."

Ms. Benson wrote more than 130 books for young people. ``It was my contribution to the children of America," she said.

Asked in an interview in 1999 what she thought of being Carolyn Keene, she answered, ``Some things I liked and some things I did not like. It was a day's work. I did it just like I did my newspaper work. I wrote from early morning to late night for a good many years. One year I wrote 13 full-length books and held down a job besides. That takes a good deal of work."

Ms. Benson worked as a reporter and later a columnist for the Toledo Blade (Ohio) until she fell ill at her desk on Tuesday, May 28th, 2002. She died at the hospital the next day.

``I always wanted to be a writer from the time I could walk,'' she once said. ``I had no other thought except that I wanted to write.'' She wrote children's stories when she was in grade school and won her first writing award at 14. As she reached her 90's, her health and eyesight began failing. She said about writing, ``I know I'll miss it more than anything in my life." 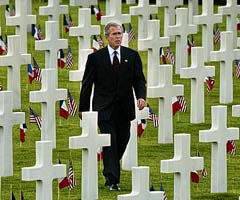 
"They went not for conquest and not for gain,
but only to protect the anguished and the innocent.
They suffered greatly and by their heroism in a thousand forgotten battles
they added a luster to the codes we hold dear:
duty, honor, country, fidelity, bravery, integrity...."

-- William Sessions, former FBI director
and a veteran of the Korean War

"I pray that our Heavenly Father may
assuage the anguish of your bereavement, and leave
you only the cherished memory of the loved and lost,
and the solemn pride that must be yours, to have
laid so costly a sacrifice upon the altar of Freedom."

"If a book comes from the heart,
it will contrive to reach other hearts."

"A great painting, or

symphony, or play
doesn't diminish us,

but enlarges
us, and we, too, want

to make our own cry of
affirmation to the

power of
creation behind the

universe. This surge of
creativity has

nothing to do
with competition, or

This response on the

part of any
artist is the need to

make incarnate the new
awareness we have

been granted
through the genius of

"Consider the postage stamp, my son.
It secures success through its ability
to stick to one thing till it gets there."

"I am beginning to learn
that it is the sweet, simple things of life
which are the real ones after all."

"A writer needs three things,
experience, observation, and imagination,
any two of which, at any times any one of which,
can supply the lack of the others."

"Any story worth telling, any lesson worth teaching
and any idea worth expressing is worth writing about.
And if you can tell, teach or explain well,
you can write a book.
So if you really, really want to write,
what's stopping you?"

"Wilbur never forgot Charlotte. Although he loved her children and grandchildren dearly, none of the new spiders ever quite took her place in his heart. She was in a class by herself. It is not often that someone comes along who is a true friend and a good writer. Charlotte was both."

~ Excerpt from Salutations! Wit and Wisdom from Charlotte's Web
by E.B. White, published by HarperFestival
(copyright © 1999).

"You have been my friend," replied Charlotte. "That in itself is a tremendous thing. I wove my webs for you because I liked you. After all, what's a life anyway? We're born, we live a little while, we die. A spider's life can't help being something of a mess, with all this trapping and eating flies. By helping you, perhaps I was trying to lift up my life a trifle. Heaven knows anyone's life can stand a little of that."

~ Excerpt from Salutations! Wit and Wisdom from Charlotte's Web
by E.B. White, published by HarperFestival
(copyright © 1999).

"In this short Life
That lasts an hour
How much -- how little -- is
Within our power."

"Nothing in the world can take the place of persistence.
Talent will not.
Nothing is more common than
unsuccessful people with talent.
Genius will not.
Unrewarded genius is almost a proverb.
Education will not.
The world is full of educated derelicts.
Persistence, determination and hard work
make the difference."

Best viewed with Netscape 2.0 or higher